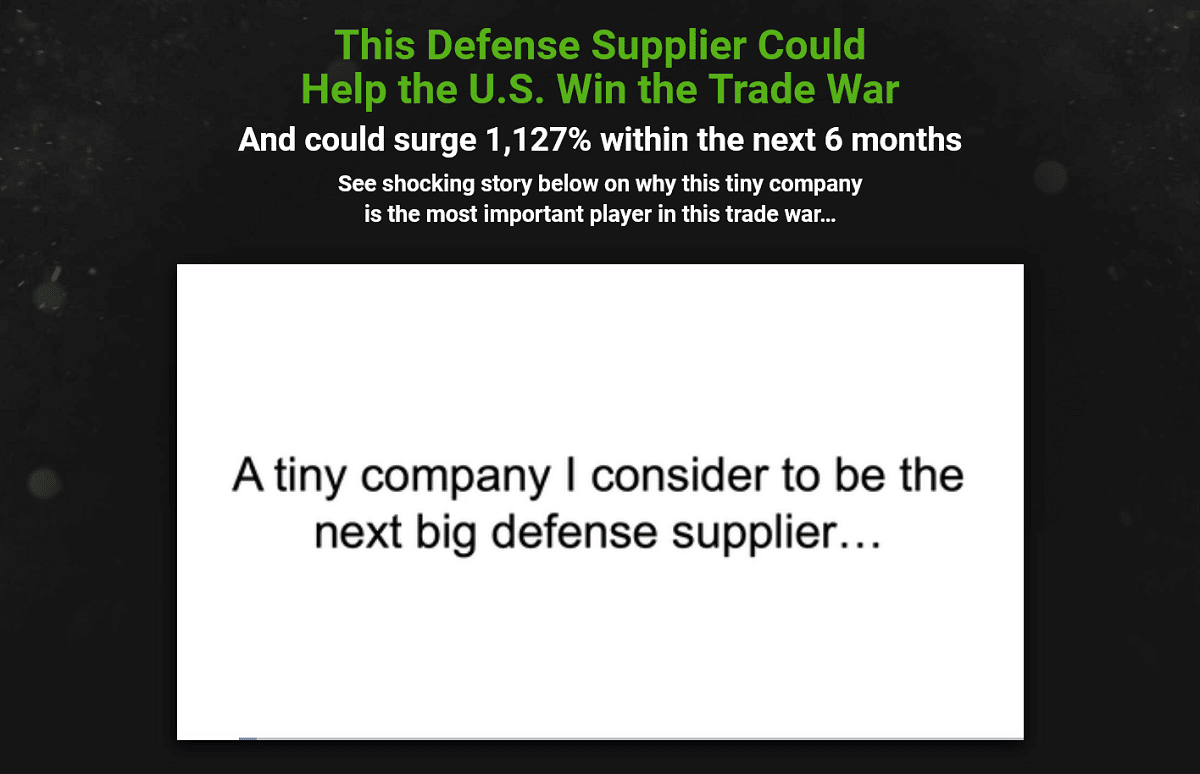 According to Nick Giambruno, America is dependent on China to supply its military with an advanced technology known as the “kill switch”. Note that every advanced weapons system that is capable of extraordinary performance must carry this technology at its core.

Amid the trade war between the United States and China, it’s predicted that China has restricted the supply of “kill switch”. As a result, it may create a crisis for the US defense apparatus.

That’s what has led Nick Giambruno to identify a tiny company that will potentially be the next big defense supplier for the US. This company is going to be integral to national security.

Therefore, smart and careful investments in this company’s stocks can help you yield big, positive returns in the long run.

It’s a tiny “defense supplier” that will be a “life saver” to America’s national security…And help America win this nasty trade war, and give China a serious jab…

Of course we’ve seen what has happened to companies that own defense contracts, supplying the military with the technology or weapon it needs.

These tiny companies are a retiree’s jackpot.

For the first time in nearly decades, the Pentagon has found a new supplier of rare earths elements—outside of China. This company controls an estimated 9.6 million tons of rare earth reserves in a U.S.-friendly country.

That’s more than enough rare earth elements to keep the armed forces firing at full tilt, for the next two decades…

After talks and negotiations with the Department of Defense…

The company is now setting up the world’s ONLY rare earths refinery (outside of China)… in Texas.

It will be the first of its kind— ever— on U.S. soil (good to see manufacturing coming back to the U.S.).

And this refinery will have the capacity to produce at least 1,200 tons the final rare earth product…

Enough to keep the greatest military on earth – firing at full tilt – for years. But also potentially send the share price of this tiny defense supplier multiplying exponentially.

You can expect full details on this tiny company, ticker symbol, and all the details in your free research guide:

De-Fang the Red Dragon and Make 11X Your Money

It’s yours free once you sign up for a subscription to Crisis Investing.

What is Crisis Investing Research Service?

Crisis Investing is Casey Research high-end service. It’s priced at $3,000 a year. In a crisis, where most people only see danger, Nick Giambruno sees opportunity. Crises often allow you to buy a dollar’s worth of assets for a dime or less. Spotting these bargains is Nick’s specialty. Crisis Investing is a research service that provides you with all you need to know about these incredibly profitable opportunities. Many of the world’s greatest investors have made their fortunes this way… but anyone can do it.

This is the “untold” investing strategy that can unlock retirement-type gains for you and your family to live well for the rest of your life.

In short, Crisis Investing is one of the world’s greatest wealth-building secrets… known to history’s greatest investors. This high-end research service can help add several zeros to your bank account because it’s focused on short terms gains… Profits that you can claim within a few months… sometimes weeks.

Nick is ready to make you an unprecedented offer.

For a limited time you can sign up for a full year of Crisis Investing at a special discounted price of $1,795.

What is included with your Crisis Investing subscription?

Here’s Everything You’ll Get with Your Subscription:

“De-Fang the Red Dragon and Make 11X Your Money.”

It reveals the full details on this tiny rare earth supplier, including its ticker symbol and Nick’s full “buy” details. Plus, inside this report you’ll also learn how to profit from the surge in all rare earth metals—with one investment.

You see, there are over 15 types of rare earth metals used by the military, and other technology applications like cellphones, TV, electric cars, etc. As China shuts down supplies, rare earth metals prices are exploding. Investors are already getting rich.

We’ve found a way you could capture all the upside of the rare earth industry, through one single investment…

And you can buy it now on the stock exchange with a single click of a mouse.

In this free report, you’ll get the one gold investment you need to make right now. So far it has…

So even if you missed out on 1,736% gains from 22nd Century Group… 3,491% in 4 months from Axim Biotechnologies… or 7,820% in 8 months from Praetorian Property, don’t worry…. Because we’ve reached a new boom phase in the marijuana industry.. . And it’s will creating new millionaires across the country.

And the tiny players are revolutionizing medical marijuana like never before.

Your free research guide reveals not one, but three pot companies that could change your financial status virtually overnight. And you’ll know why in your free report.

THE WAR ON GOLD 2020: Emergency Briefing

Hedge Fund manager and New York Times Bestselling Author details how you position your gold stock portfolio right now will have a huge impact on your wealth in the coming gold bull market.

Your subscription to Crisis Investing will also include:

12 issues (One Year) of Crisis Investing

Each month, Nick will email you the latest Crisis Investing Each issue is written in plain, easy-to-read language.

In case an opportunity arises in between monthly issues, Nick will send you a quick alert to lock in time-sensitive opportunities or take evasive action if necessary.

To make sure you get the best from Nick’s research, you’ll have your personal password to Crisis Investing’s private website.

You’ll have full access to all premium reports, archives, research videos, and open model portfolios. There are still some well-researched picks that are screaming “buy.”

Should you have any concerns or queries about your membership, our support staff is available to you weekdays between 9 am–5 pm ET.

That’s Nick’s unconditional guarantee. Take the next 90 days to try Crisis Investing. If during that period you’re
not completely thrilled with Nick’s research…

Just call Casey Research customer service department at (800) 621-0699 and you can cancel for a full $1,795 credit. You can then use your $1,795 credit towards another Casey Research service or a service from one of their corporate affiliates – Bonner & Partners and Palm Beach Research Group.

Thanks to Nick Giambruno’s research, you can potentially make 11X your money starting with this one company – a tiny “defense supplier” …

Who will soon be supplying the greatest military in the world – the U.S. Armed Forces – with rare earth metals…Thanks to new critical deal negotiated with the Pentagon. That’s because China is shutting down rare earths exports to the U.S. to retaliate this trade war…

This tiny ‘defense supplier’ will soon kick-off a new rare earth refinery in Texas – the only outside of China and the first in the U.S.

How Much Richer Can This Crisis
Opportunity Really Make Me?

It’s hard to say how much exactly. Obviously, this is a well-calculated speculation. But the numbers look incredibly good from where we sit. Remember the last time China cut supplies of rare earths in 2010, prices shot up 10-fold in months. And since this tiny company is now deemed a “defense supplier”, there’s no telling how high the stock could run.

One decisive move and you could be turning pennies into 1,000% gains. Only this time around we could replicate those figures by a factor of 5. Even 10. Remember this tiny company is the ONLY one ready to supply the U.S. with rare earth elements straight from its mines… with its own U.S.-base refinery.

It takes years to build a rare earths metal plant and refinery… which is why China ran a monopoly for such a long time.

Great thing is this tiny company has been working on their business for some time and it’s now established to compete with China.

And it’s controlling the entire rare earth refining process from start to finish. From an investment standpoint this company promises to be the next retirement jackpot.

Now this tiny company trades at a ridiculous price… below $3… for now. Meaning you could grab a meaningful stake of 1,000 shares for around $3,000!

Any surge in rare earths prices will send shares of this company running wild. Even if rare earth prices surge by just half of our estimates…

This tiny company could still see its revenue surge 5-fold.

Nearly all of it came from China.

Just to be conservative, let’s assume this little company meets half the U.S. rare earth needs. That’s an added $80 million into the company’s coffers. And we have not factored in any potential increases in the price of rare earth elements.

But what if rare earth metal prices surge 10-fold—as they did in 2010—as a result of the ongoing U.S./China trade war?

That could take this company’s revenue up to $800 million. Enough to turn this tiny company into a ten-bagger over time…