With 2017 wrapping up, it’s time to protect your gains and start planning for 2018. It’s hard to fight this bull market, but that doesn’t mean we won’t see a sizable pull back. In fact, this market has risen so far, it could take a swan dive and still be in an uptrend. Letting your gains get wiped out before Christmas doesn’t sound like fun. That’s why I’ve been getting a lot of questions about hedging lately. Problem is, if you don’t do it right, hedging can be a ‘hidden tax’ on your portfolio.

The common strategies ‘experts’ recommend have several serious flaws:
The cost cuts deep into your profits. They don’t properly hedge your individual portfolio .They’re confusing and it’s easy to make expensive mistakes .The good news is that you don’t have to just cross your fingers and hope the market keeps flying higher. Turns out, ETF options aren’t just an amazing way to rapidly grow your account. You can also use them to hedge your portfolio. Once you see how easy and low cost it is to properly hedge downside risk, I think you’ll be amazed.

On Tuesday, you’ll see exactly what I mean.

If you haven’t already signed up for this ETF options webinar with special guest John Carter, author of bestselling trading book Mastering the Trade, go ahead and grab your spot here. 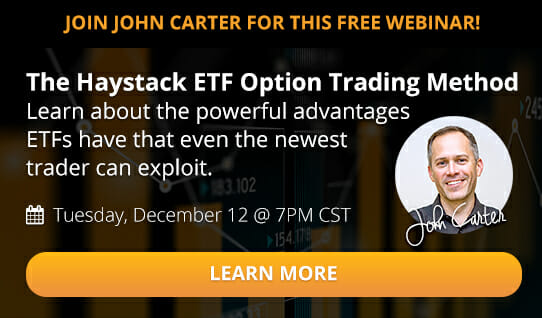 ETFs are primed to surge even more in popularity in 2018. This year a record $600+ billion flowed into Exchange Traded Funds. While mutual funds are stagnant, ETFs have been on a steady rise thanks to their numerous benefits, like broad diversification, relative low cost, and daily liquidity.

One proven way to trade ETFs is with options.

They can be much better for smaller accounts than stock options. And like I said, they can be a fantastic way to properly hedge a portfolio. Especially when you have the right tools.

And a whole lot more…

ETF options represent a huge opportunity for 2018, whether you want to properly hedge your risk or rapidly grow your account.

My goal for this interactive webinar to have John show you some simple strategies to take full advantage of the hottest sectors (like oil) while not letting the ‘hidden tax’ eat into your profits.

Grab your spot for Tuesday’s webinar below:

Did you know that years ending in 7 have had some of the biggest sell-offs?

And of course, many of these big drops occur between August and October.

So I was thinking you’d want to know about smart ways to exploit this pattern.

Turns out a trading friend of mine, John Carter, has developed a high probability system to catch ‘Implosions and Explosions’.

If you haven’t heard of John before, he’s traded for over 25 years.  He’s not only written a best-selling book on trading, he’s also earned quite a reputation for catching huge moves (and not just in years ending in 7).

His most famous trade pulled in $1.41 million on TSLA CALL options inside of 24 hours. Like many of his trades, he closed out that position live in his trading room.

Of course, John insists that trades like that aren’t typical and don’t come along every day, but I just wanted to let you know something about his background.

Just in time for the August to October ‘window of opportunity’ John is doing a special webinar dedicated to catching ‘Implosions and Explosions’.

And this is a year ending in 7, so I think you’ll agree now is the perfect time to learn how to spot these ‘predictable’ moves in advance.

Here’s just some of what you’ll discover…

•  The High Probability Setup that made $1.417k in one day on TSLA (and the low-risk way to trade monster moves)

There is no doubt that we are living in very interesting times.

You don’t want to miss this free training!

Any one of a dozen things could send the market higher or lower in the coming few months.

So, if you’re serious about being consistently profitable trading options, I think you’ll agree John’s upcoming webinar is well worth a few minutes of your time today.

This is a FREE TRAINING on the rapid account growth strategies that are working now.

John F. Carter will reveal his new 90-day trading plan. With the market at all-time highs, it’s time to adapt to conditions most traders haven’t seen in years.

Attend this webinar to discover how John grew his account by 82% between January and February, 2017. Find out what’s working NOW because outdated strategies could be dead wrong in current conditions.

Spy on the Big Money: How to Pocket Weekly Profits and Catch the Big Waves in 2017

Do you want to know how to profit from one of the biggest wealth shifts in modern history?

In case you’ve never heard of John Carter before, he’s the guy who made over $1 million in 24 hours on TSLA options.

Hurry and register now to get the whole story . . .